"The Wings of Dragons is Josh VanBrakle's first novel, and it's an impressive debut. The compelling story line, characters, and myths are certain to intrigue adventurous readers and leave them eagerly anticipating book two of the saga." - ForeWord Reviews 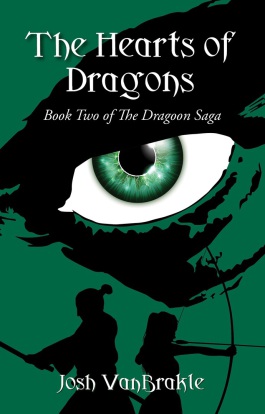 Seven months ago nineteen-year-old Iren Saitosan saved the continent of Raa, but victory had its price: his Dragoon transformation left him unable to use magic. In a culture that relies on spells even to open doors, the impairment has crippled him. Unwilling to live dependent on his friend Minawë, Iren departs in search of a cure.

Meanwhile, Minawë faces a greater loss. She had to watch her mother’s murder, and she has yet to overcome her grief.

She will have to find the strength to move on, though, because a ruthless pair is hunting Iren. They know about the Dragoon, and they’ll stop at nothing to gain its power. If they succeed, they’ll plunge Raa into its most devastating war in a thousand years. Only Minawë can rescue Iren before that happens. But even if she finds him in time, a secret from the past may turn him against her.

To purchase your copy of The Hearts of Dragons on ebook or paperback, please visit Amazon.com.